Book Titles That Are Mindblowing: Three Tips for Titling Your Nonfiction Book

“Don’t judge a book by its title”—but that’s what we do when we’re looking at books and considering whether to buy them. A title can make or break your book. Here are three utterly mindblowing tips for titling a nonfiction book.

1. Think holistically. Your title, subtitle, and jacket work together to sell your book. I coauthored a book that got all three right: Raising a Sensory Smart Child is clearly is aimed at parents (hence “child” in the title and subtitle, and “raising a … child”). The title presents an intriguing concept (what are “sensory smarts”?). And the jacket features a happy, active child that has emotional appeal to parents who are stressed out and worried and want their child to be joyous and full of life. Sensory kids often can’t sit still so the picture puts a positive spin on that phenomenon.

Jacket, title, and subtitle work together to make a great book package.

2. Speak to the heart and mind. A great title will make you laugh, intrigue you, touch your heart—in short, it will speak to your mind and your heart. Here are some of my favorites:

That Crumpled Paper Was Due Last Week. If you laugh and say, “Yep, that’s my kid,” you know you have to check it out, right?

Mindblowing Sex in the Real World. The author, Sari Locker, PhD, wanted a twist on “The Real World,” which was an MTV hit at when the book was in production (I was the acquisitions editor). I thought a contrast would be good and came up with the word “mindblowing.” One of the suits at the publisher pushed hard against it but we pushed back. The book and title were hits, and years later, the title was mentioned in the New York Times. That is a title with staying power! (Pun intended.)

3. Switch It Up. Bev West, my coauthor and cousin, came up with “cinema therapy” and “mood movies” or “movies to match your mood.” Our book proposal’s cover sheet shows what we settled on. Someone in-house at Dell, our book publisher, suggested making “cinema therapy” one word, Cinematherapy, and using it as the title, relegating the “mood movies” concept to the subtitle. We also wrestled with “girl” vs. “gal” and other alternatives (“girlfriend’s guide” was taken). Contrast the proposal title/subtitle to the final jacket.

Cinematherapy, movie therapy for women: a vision turned into a successful book series and television show. Original title and subtitle were flipped around.

So as you’re titling, start picturing your book’s jacket. Look at other books—not just online but in a bookstore. Look at their jackets. Which ones do you respond to, and why? What are the title and jacket trends in your genre? Do you want to match them or buck them?

11 Lessons on Writing a Bestseller from John Gray’s Blockbuster Hit MEN ARE FROM MARS, WOMEN ARE FROM VENUS

Twenty years ago, I had the honor of being involved in a cultural phenomenon called Men Are from Mars, Women Are from Venus. Remember that catchphrase? It came from a mega-best-selling book by relationship counselor John Gray, PhD. My boss, Susan Moldow at HarperCollins Publishers (then Harper and Row), signed up the book and as her assistant, I co-edited the manuscript with her. My contribution included a key question that John expanded upon, and insights into how women and men at the younger end of the baby boom might respond to some of his advice. I went on to co-edit or edit his next two books—What Your Mother Couldn’t Tell You and Your Father Didn’t Know and Mars and Venus in the Bedroom (about physical intimacy in male-female committed romantic relationships). Like John’s first book, they became New York Times bestsellers.

I well remember calling John’s agent every Thursday morning when I came into work to let her know his ranking on the USA Today bestseller list, which was new at the time. It was a thrill to see him become famous, to watch his hardcover book sell 9.5 million copies in the U.S. alone and become the bestselling American nonfiction book of the 1990s. I learned so much from John that helped me with my own success—and if you’re an aspiring author, you too can learn from him. Here are eleven lessons I draw from his book’s phenomenal success.

1. Indulge your curiosity. John Gray became fascinated by male-female romantic relationships after spending nearly a decade in celibacy as a monk working for the Maharishi Mahesh Yogi (the fellow the Beatles took a shine to and about whom John Lennon wrote the song “Sexy Sadie”). Like many great cultural innovators, John Gray was curious—and approached the task of learning how to start and maintain a healthy relationship with a woman by adopting beginner’s mind, as they say in Buddhism. Where can your curiosity take you?

2. Research your audience as you build your platform. What John Gray learned from formal study and from doing in-person workshops with men and women helped him formulate and refine his ideas. He told me that he’d throw an idea out there in a workshop—like that men are similar to rubber bands, needing to pull away and then snap back to emotional intimacy—and read the audience’s body language. If the men smiled, nodded, and sat forward in their seats while they women’s eyes grew wide, he knew he was on to something universal. And if everyone looked blank and crossed their legs and arms, sitting back in their chairs, he knew he had to refine the idea. This is market research at its very best—you must get your ideas out there and try them out on real people.

3. Be true to the needs of your audience. While self-help books typically sell to women, John Gray knew how to make his book appeal to men as well, and knew that if he made it “guy friendly,” women would buy it and leave it on the nightstand or quote from it to their husbands and the guys would pick up on it and recommend it to their male friends. Sometimes when working on his books, I’d make a suggestion to John and he’d say, “But men won’t respond well to that. I have to say it in a way that won’t turn them off OR turn women off.” He insisted that his audience would want key ideas highlighted in boxes—which some readers complained about but the majority loved. He said this element echoed how he would repeat a key idea when speaking—and the audience would want it in the book, too. He’s right; they did.

4. Consider self-publishing first. John wrote a book called Men, Women, and Relationships to use with his workshop participants. Its success impressed book publishers who had the opportunity to buy the rights to republish it.

5. Come up with an amazing title. Before writing a book proposal to sell to editors via a literary agent, John Gray came up with a fantastic title—the article in USA Today on the twentieth anniversary of Men Are from Mars, Women Are from Venus dominating their bestseller list explains how. He had the concept right—but his self-published book had what we’d call a “working title.” He needed a memorable hook that grabbed your heart, and in this case, made you laugh in recognition. A play on words is a great way to come up with your amazing title. We’ve all heard “Men are from Mars!” It’s the “Women are from Venus” that makes you want to open up the book! 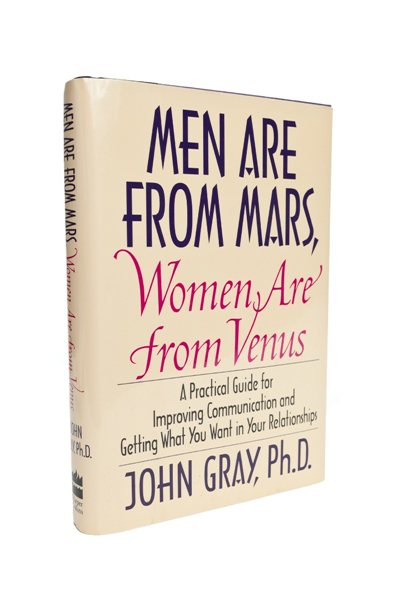 6.  Persevere at building your platform. John Gray built his platform before he wrote a book proposal and he continued building it while writing the book, while it was in production, and after it was published. He used his own advice about wooing women with roses to help him woo Oprah into putting him on her show—and she did it four times. Every time he went to a city, he went into the bookstores and introduced himself. He was a tireless self-promoter because he had a passion for his message. Platform building can never start too early, and it never ends.

7. Have a sense of humor and lighten up. People can get very defensive about having their problems or challenges pointed out, and often have a lot of baggage about gender stereotypes and roles. John Gray has always used humor to open people’s hearts and minds, and much of his humor is self-deprecating. Watching him do a lecture is so entertaining that he actually inspired a real off-Broadway stage show and then went to Broadway to do his own one-man show! His book also inspired the movie, What Planet Are You From? by Gary Shandling. Humor engages people and brings out their own creativity!

8. Don’t let others tell you you’re not an expert. Many criticized John Gray for not having a PhD from a credentialed university with brick-and-mortar presence (this was in the days before online learning). They dismissed the work he’d done trying out his ideas on real people and honing them, and couldn’t stand the fact that someone outside of mainstream academic circles had achieved success. John Gray was always completely open about his education and his training—he wouldn’t let anyone shame him into silence. Don’t let anyone shame you—trust your inner sense of knowing about how much research you need to do, and of what type, before writing a book of value for a wider audience.

9. Expand your brand. A book shouldn’t pigeonhole you. John’s second book, What Your Mother Couldn’t Tell You and Your Father Didn’t Know, expanded on the first by going deeper into how men and women are different and how knowing about and respecting those differences will help your relationships. His third book, Mars and Venus in the Bedroom, was about the physical intimacy piece. Later, he expanded to talking about male/female romantic, monogamous, long-term relationships in other ways—and his new book will be about the role of ADHD in these relationships. Your brand can and should expand over time.

10. Put yourself into your book. If you take your ego and personality out of your book and platform, you take the heart and soul out of it. John always talks openly about his return to sexuality after having been a monk, his relationship experiences, and his vulnerabilities. That’s what gives his work heart and soul. Do you have the courage to put YOU into your book?

11. Turn your weaknesses into strengths. A celibate monk is the last person to know about how to woo and retain a girlfriend—but John Gray made his situation into a strength by using it as a foundation for learning. Can you imagine how a woman responds to, “I have to tell you, I’ve been a celibate monk for years and I’m hoping you can teach me something about women?”! People who have dyslexia and trouble reading often are told they can’t write, but John Gray didn’t let dyslexia stop him from his goal of writing a book. His ADHD may have made focusing difficult as he was growing up and as an adult, but it also gave him the drive and focus to use his passion to create a cultural phenomenon. And it makes him a dynamic, high energy presenter! What weaknesses of yours are actually hidden strengths that can help you in your goal to write a book?

Congratulations to John Gray on the twentieth anniversary of his USA Today and New York Times #1 bestseller, Men Are from Mars, Women Are from Venus!